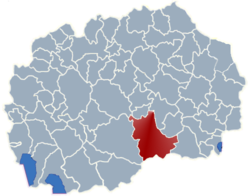 Faris is a village in the Kavadarci municipality of Macedonia. Faris original name (with diacritics) is Fariš. Faris distance is 17.78 km / 11.05 mi away from the center of the municipality.

Welcome to the Faris google satellite map! Faris Village is situated in Municipality of Kavadarci, Kavadarci, Macedonia, its geographical coordinates are 41° 27' 11.85" North, 21° 48' 0.64" East.

See Faris photos and images from satellite below, explore the aerial photographs of Faris in Macedonia.