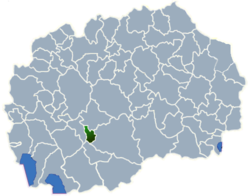 See Pasino Ruvci photos and images from satellite below, explore the aerial photographs of Pasino Ruvci in Macedonia.