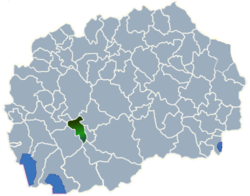 Selce is a village in the Krusevo municipality of Macedonia. Selce original name (with diacritics) is Selce. Selce distance is 5.58 km / 3.47 mi away from the center of the municipality.

Welcome to the Selce google satellite map! Selce Village is situated in Municipality of Krusevo, Krusevo, Macedonia, its geographical coordinates are 41° 25' 8.45" North, 21° 15' 9.52" East.