The founders of modern Macedonian painting included Lazar Licenovski, Nikola Martinoski, Dimitar Pandilov and Vangel Kodzoman. They were succeeded by an exceptionally talented and fruitful generation, consisting of Borka Lazeski, Dimitar Kondovski, Petar Mazev and many others who are still active. Vasko Taskovski's work was presented to the Paris public in 1992 with an imposing exhibition and auction of about 100 works. Vangel Naumovski, who was long classified by art historians as a Naive artist, is well-known for his Ohridska Porta Gallery, as well as for the original world of his paintings. 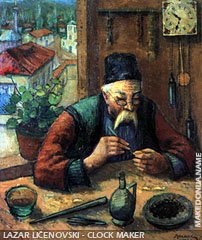 In addition to Dimo Todorovski, who is considered to be the founder of modern Macedonian sculpture, the works of Petar Hadzi Boskov, Boro Mitrikeski and Tome Serafimovski are also outstanding. The Museum of Contempory Art and the Art Gallery in the Daut Pasha Baths are considered the best galleries. In 1993 there were 413 exhibitions attracting about 240,000 visitors. There were also 12 artists' colonies with some 120 participants, of whom 40 were foreign painters and sculptors. 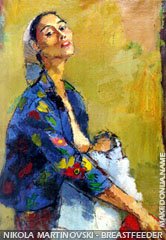