Crnorizec Hrabar was an anonymous writer from the Slavonic medieval literature, who was assumed to live in the 10th century. The pseudonym Crnorizec Hrabar means brave monk. Some Slavists, for instance Vinegart and Konevski believe that that pseudonym was used by one of the most distinguished Cyril and Methodius' disciples, Naum of Ohrid. 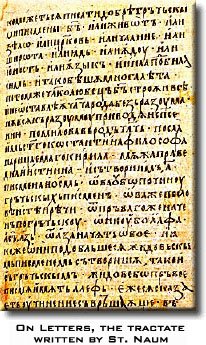