St. Erazmo: is old Christian basilica and necropolis. It is located five kilometers from Ohrid on the Ohrid - Struga freeway in the southern part of Gabovski Rid. Researches made in 1974-1975 and founded three part basilica and necropolis from the middle ages. In the necropolis have been researched 124 graves, from 6th to 12th century. Can be seen from the freeway Ohrid - Tetovo. 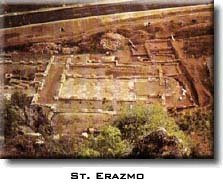 St. Erazmo, Towers (Kulišta): living location from early ancient and Hellenistic time. Located on the highest peak of Gabovski Rid, near the northern coast of the Lake of Ohrid. In the northwestern part of have been kept walls with dimensions 2x2.80 meters. The fortress has been made from stone blocks.