Scupi, town from late ancient and roman period is located in north-western part of Skopje near Zajčev Rid, the village Zlokukjani and the river Lepenec. 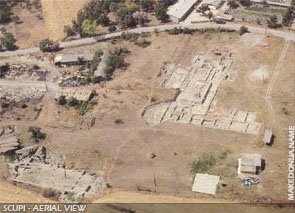 The establishment of Scupi is connected with the roman entering in Dardania at the end of the first century BC. Most probably is that Scupi was founded as war camp. As the time goes the war camp became a town with a status of colony. The establishment of Colony Flavia Scupi made the king Dominian (84-85 year). The citizens lived all over Skopsko Pole, for which there are epigraphic confirms. The Romans located the town by important magistral roads that connected the Aegean Sea with central Europe, Thrace with the Adriatic coast. The town of Scupi has wonderful geographical position. In the year of 286-296 , the powerful Gothic and Herullian forces crossed this area. By forming the province of Dardania at the end of 3th century Scupi becomes seat of province authority. In the year 379-388 in Scupi stayed the king Teodosius.

In this period Scupi became an episcopacy seat. In the end of the 4th century is noted a big war formation. In the year of 447 Scupi suffered from the war routes of the Hunes. And in year of 518 there was the biggest disaster, and earthquake. After this earthquake Scupi became a rural place for living. The urban style of living was gone. 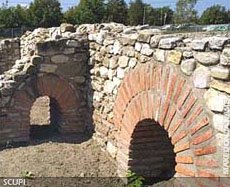 Civil Basilica: is located in the southern part of Scupi. It is with mosaic with geometric forms and ornaments. It is dating from the early 4th century. Researches made in 1975-1979.

Christian Basilica: located southwestern from the theatre. It has apsida on the eastern side and bapsterium on the western side. Dating from the end of the 5th and beginning of 6th century. Researches made in 1975-1979.

Grand Palace: lies deeply under the Christian basilica. There are founded some fresco decorated walls and small termic part. Dating from the early 4th century. Researches made in 1973.

Thermi (Baths): located in the central town part. They have simple plan of construction and dating from 4th century. Researches made in 1983-1989.

Street: one of the most important communications in the town with orientation northeast-southwest, as all complexes in Scupi. It has size of 8,50 meters and made of big stone blocks. Dating after 286 year. Researches made in 1976 and again in 1980-1989.