Blaze Koneski was a poet, narrator, essayist, and Slavist, born in the Nebregovo village, near Prilep in 1921. His appearance signified the beginning of the contemporary Macedonian literature. 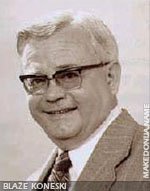 Blaze Koneski was member of the Macedonian Academy of Science and Art (MANU) and its first president. Blaze Koneski gained special awards for his literary and cultural activity.