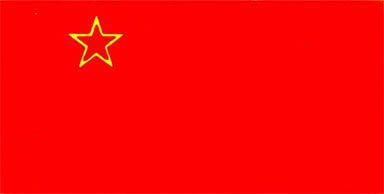 After the Second World War, the Vardar part of Macedonia was given a status of a federal republic, in the border of Yugoslavia. The flag was chosen during a meeting of the Anti-Fascist Assembly for National Liberation of Macedonia, on December 31th, 1946.

The second flag of Macedonia. After it's independence from SFR Yugoslavia, Macedonia changed it's flag into the flag of the ancient Macedonian dynasty. The 16 pointed sun star, became official flag with the yellow and red fragments. Due to the Greek propaganda (which was activated in early 1980), and after an economic blockade of the borders, the flag was changed in September 1995. Soon, the Macedonian Senate has approved changes to the country's flag, a move to opens the borders to neighboring Greece to end the clipping economic blockade imposed on Macedonia in period of 18 months. The Macedonian Senate voted 110 to 1 to approve a new flag that is acceptable to Greece. The yellow and red colors are retained, but the 16 pointed Sun of Vergina (the symbol of the Macedonians) that Greece claimed that is Greek symbol has been removed. The 16 pointed sun was removed from the state flag, but it still retains it's role - flag of the Macedonian Nation. 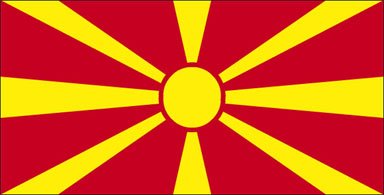 "Flag of the Republic of Macedonia since 1995"

The new state flag has stylized eight - ray sun spreads over the length of the flag. As a result Greece stop the blockade on it's borders with Macedonia. Now Macedonians are furious and Greeks satisfied.