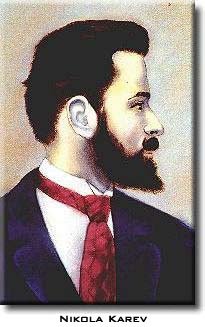 The congress in Solun brought a decision for starting an uprising in the spring of the year 1903. Only the date and the place of the start was missing. Due to this, a congress was held in the Bitola - Demir Hisar district. In the period of 2-7 of May, 1903 in the village of Smilevo, the congress was held. 29 delegates were invited, and discussion was opened by the question for an uprising in Macedonia. Beside the fact that some of the delegates like, Gjorgi Sugarev, Nikola Rusinski, Nikola Karev, were against the start of an uprising claiming that the organization is not in the final stage, yet. But the decision of the president, Dame Gruev who had the final words. He was for an uprising. It was decided, the uprising to start at the Bitola district. They decided the uprising to start at the Bitola municipality. A decision was brought, they created a council with three members leaded by Dame Gruev.

After the short prepares in the region of Bitola such as, collecting food, weapons, munitions, medicines. A lot of preparations were made. The date was decided, on the St. Ilija (Elijah's) day, on 2nd August. The organizers of the uprising sent an official letter to Europe, that an uprising will start in Macedonia and the reasons for it. A letter was sent also to the chief of the Salonica railway, that during the uprising the trains will be bombed (in order not to kill innocent people).

On August 2nd year 1903, started the uprising of Ilinden. In Macedonia the uprising had most success in the district of Bitola.

The uprising (rebellion) started in the Bitola district. After several successful battles the village Smilevo and the city Kruševo (later the became center of the uprising) were liberated. The start had great success in the districts of Lerin and Kostur (today in Aegean Macedonia, Greece). On August 4th 1903, a group of 600 uprisers liberated the city of Klisura (Aegean Macedonia, Greece). On August 17th, the united 700 uprisers liberated the city of Neveska (Aegean Macedonia, Greece). Very soon, the number of liberated villages was growing fast. A lot of villages in the districts of Kostur, Lerin and Prespa were liberated and a Macedonian authority was established. The greatest battle happened at the villages of Ezerec between 300 uprisers and 2000 Turks. The uprisers had a great success also in the Ohrid district. The greatest battles in the Ohrid district were at the villages of Malesia and Gorna and Dolna Debarca. Big battles happened also in Prespa. The uprisers made also success in the regions of Kičevo and Demir Hisar. In this districts, the greatest hits between the uprisers and the Turks were at the villages of Priblici, Karabunica and Izvor, and there was even try to liberate the city Kičevo. Uprising activities were also in the region of Skopje, Solun (Salonica), Serez and Odrin. The actions in the district of Serez, were leaded Jane Sandanski. Battles were carrying on all over Macedonia, and more than 30,000 uprisers, were in the mountains, armed.

"Map of the Ottoman province Macedonia and the uprising in 1903"

:: THE LIBERATION OF KRUšEVO & THE ESTABLISHMENT OF THE REPUBLIC ::.. 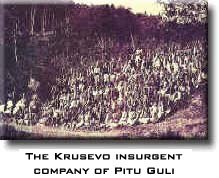 Before the start of the uprising, Nikola Karev (one of the organizers) sent a mass call to the population in Kruševo. Here on the night between August 2nd and 3rd, a group of 750 people attacked the Turkish figures in the city. The phone cables were cut, so the Turks cannot ask for help. They greatest attacks were on the military house and the post ofiice of Kruševo. The battles for liberation of the city at, lasted for several hours. The plans for establishment an rebel national authority known as THE KRUšEVO REPUBLIC, were done at the vicinity of Gumenje. Kruševo was set for a center of the republic. Very soon an aseembly was called, contained by the citizens of the city and the surroundings. A temporary 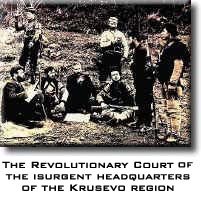 government with 6 members was formed, and was lead by Dinu Vangeli. The government took care of the fundamental stuff, such as: judiciary, requisition, finance, inside affairs, food stocking and health. That's how the first republic in the Balkans, the Republic of Kruševo was built on democratic principles. Many amunicition stores were opened. In the village of Selce, was created the master-piece of the uprising, the cherry wood cannon (known as Crešovo Topče). Also a hospital was opened for the wounded and a restaurant and a bakery. Of course organizer of all this was the President of the Kruševo Republic, Nikola Karev. The manifest of the Kruševo Republic was made... [ Read more ] 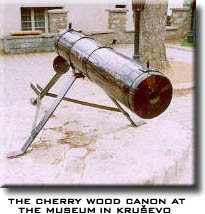 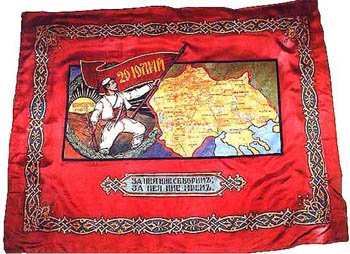 "The Flag of the Ilinden Uprising & the Kruševo Republic" 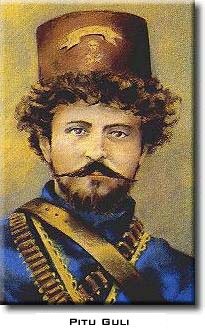 The success of the Ilinden uprising and it's result, the 10 days Kruševo Republic has a important great value for the Macedonian people, especially the liberation of Bitola, Kruševo, Klisura, Lerin, Kostur and others. Again the uprising was active all over the territory of Macedonia. But Macedonia was important Ottoman province and they hired a lot of soldiers to put the end of the uprising. The first battle was in the region of Smilevo and Gjavato, where a great battles were done. After a couple of days hard battles on both sides and after loosing of the region of Smilevo the Macedonians got back in Kruševo. The Turks arrived around Kruševo from all its neighboring cities, like Bitola, Prilep, Kičevo. On August 12th the town of Kruševo was surrounded by the Ottoman forces. The uprisers settled in the town decided to give their live for independence of  Macedonia. After the great ten-hour battles, at Mečkin Kamen, Sliva... the forces of the duke Pitu Guli were heroic defeated. At the end Kruševo was bombed, robbed and burned. Part of its population escaped. In the period of August and September 1903, a lot of great battles were made between the Macedonian uprisers and the Ottoman forces in the regions of Kostur, Lerin, Prilep, Prespa, Ohrid and Kičevo. A lot of villages (houses school and churches) were burned down. Plenty of the population kids and women were burned together with the houses.

Due of all this on October 2nd 1903, the main council of the uprising, decided the to stop activities of the uprising and the weapons to be placed in secret warehouse and to keep in order to use for other liberation activities.