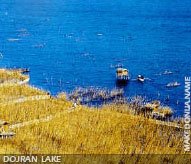 Lake Dojran is the smallest of the three tectonic lakes in the Republic of Macedonia and it's location is in south-eastern Macedonia, on the Macedonian - Greek border. It is settled in the Dojran valley between the Belasica, Kruša and Kara Bali mountains. It is considered that the lake today represents remains of a larger Peonic lake and lies on an altitude of 148 m.

The Dojran lake has a surface of 43,1 sq km, of which 27,3 belongs to Macedonia and 15,8 sq km on Greece. The shape is similar to a circle and it's length is 9 km and it's width 7 km. The depth was 10 meters, but today after loosing it's waters because of the Greek farmers it's depth is between 3 and 6 meters. 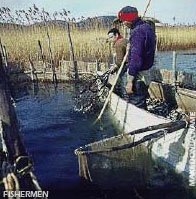 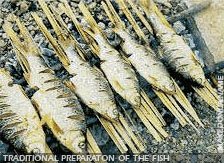 There are several rivers that flows in the lake, but most important are Surlovska and Hanzda. There are also many gorges called by the people "kajnaci". The water from the lake flows in the river Gjolaja. Due to its small surface and depth, during the summer period, the water in the lake is considerably warm and in August is approximately 28 degrees, while in the winter period it's getting frozen. The color of the water is dark green.

Due to the lake 15 types of fish, (of which famous are kostreš, plašica, carp, sheath-fish) and water grass (algi), it enters the list of world's rarities due to its special features. It is the richest lake in fish in Europe. The ancient way of fishing with the assistance of birds (kormorans) and gratings practiced here is very interesting. A similar method of fishing exist only in distant China, and is carried out during the winter.

Here, the notorious Dojran fishermen still fish in a very special traditional way - by the help of birds, a special type of birds called Cormorants. Lake Dojran is also rich in vegetation. The algae that generate and emit iodine must be mentioned, as they make the water suitable for balneal therapy.

Today the condition of this lake is extremely poor and reason for this is Greece, member of the European Union, which used the water of the lake for its fields with agricultures. But the situation is extremely bad, and the there are Macedonian-Greek conversation in progress.

This lake's life can be saved in way of leading water somehow to it. There are a lot of plans for making this lake alive for tourists again after a long time. In September 2002, a waterline from Gjavato, was successfully built in order to fill the lake with water. This helped the condition of the lake, and in the past few years, the water level got higher enough at the normal, so the situation today is normal.