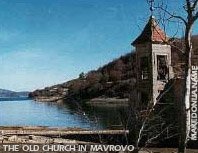 Mavrovo encompasses the most beautiful parts of western Macedonia, the mountains Bistra, Korab, South Šar Massifs, Dešat, the river Radika, Mavrovo Lake and the villages Mavrovi Anovi, Mavrovo, Leunovo, Nikiforovo, Galičnik, Rostuše, Gari, Janče, Tresonče, Bituše and Lazaropole, with total area of 73,088 hectares. In order to preserve the natural wealth of the region, it has been designated as a National Park with the Law passed on March 3rd 1952, on account of "the historical and scientific significance of the forests and wooded areas around the plain of Mavrovo, the specific landscape and the natural beauty of the region, the diverse flora and fauna and ethnological characteristics". In this area nature has created numerous beauties of different character. The relief, the climatic conditions, the hydrological and vegetative features, enhanced by human creativity, all contribute to making this region a particularly special place where the gifts of the nature and the resourcefulness of humans can be admired. 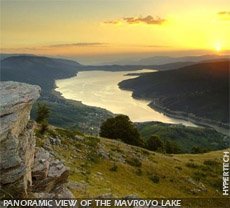 The National Park Mavrovo encompasses numerous rivers, which present a real jewel in the crown of beauty for the mountain landscape, with their wild rapids, water-falls and incredible transparency: always full with clear and cold water, the springs never get muddy. One of the most impressive parts of the park are the striking gorges of the river Radika. The most dramatic is the Baric gorge. The horizon in front of the observer completely closes leaving open only the blue sky and the steep ascending rocks, in some places 1,500 m high. The valley of the river Radika is almost completely covered with woods, except for its lower part. The river is rich with river trout, which makes it attractive for the sports fishermen. At the height of 2,300 m the river Ribnica emerges, a real alpine river, with light-green, clear and shiny water. The river valley is covered with woods and usually fresh in temperature, with tame, pleasant and beautiful landscapes.

On the mountain slopes at a very great height, there are 17 glacial lakes, as a further ornament of the mountain landscapes. The biggest lake within the national park is the artificial Mavrovo Lake, which with its clear water, surrounded with forest, is one of the special attractions in this part of Macedonia. 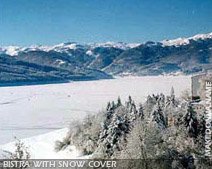 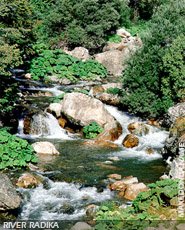 Near the village Rostuše, there is one of the most significant cultural monuments in the country - Monastery St. Jovan Bigorski. The monumental iconostasis carving is considered to be the master-piece of the carvers from this region. The masters, apart from motifs of the Bible, represented some of the flora and fauna of the beautiful region from the Radika gorge to Debar. Today, the monastery lives again actively as a religious center with a brotherhood of monks. The monastery inns have been adjusted for modern use and are rented as inns for the numerous visitors. The monastery services, the baptisms, and weddings are part of the monks life in the monastery, and at the same time they are a great attraction for the tourists. 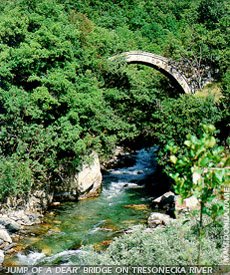 On the mountain slopes there are several villages with original and specific architecture, Rostuše, Janče, Gari, Selce and many others. In those villages there are still men and women wearing beautiful ornamental traditional dress, and with interesting customs and folklore. Especially interesting are the customs performed during the celebration of the Orthodox holidays Vodici, Vasilica, Epiphany, Easter, and especially the wedding ceremony. The famous "Galička Wedding", held every year in the village Galičnik in July is one of the most attractive customs in Macedonia. The wedding used to last for 4 days. Today, in an attractive natural scenery, beautiful Galičnik architecture, characteristic of mountain villages, and accompanied by the sound of the zurle and the tambour, they provide an unforgettable experience for the tourists. The village Galičnik is located at the height of 1,200 m. In this area sheep farming has always represented the basic means of subsistence. In the mountain pastures, the shepherds passed their summers in the mountain pastures, where the famous Galički yellow and white cheese were produced. Today on the slopes of Bistra, there are still mountain pastures, the large flocks of sheep standing out as white spots within the green meadows. 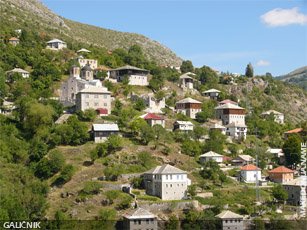 Especially rare species are the RHAMNUS PUMILA, Salix cinerea, Corallorrhiza trifida and others.

In the region of the park, there are over 140 species of birds and over 45 species of other vertebrates. Characteristic birds are:the gray falcon, Falco peregrinus; the Falcon - Falcon Subbuteo L; the eagle, Aquila Heliaca Sov; the large owl - Bubo bubo L.; the large cormorant - Phalacrocorax carbo L; the white-headed vulture- Gyps fulvus Habl; the white stork - Ciconia ciconia L; the partridge - Alecrtoris greaca Mais; and the wild pigeon - Columbia livia L. The verterbrates are, among others:the wild goat - Rupicarpa rupicarpa L., doe - Capreolus capreolus L, the bear Ursus arctos L., the lynx - Lynx lynx L, the pine marten - Mustela martes L, the otter - Lutra lutra L., the tortoise - Tustudo hermani Gm., the squirrel - Scirus vulgaris L. In the waters of the river Radika and its mountain inflows live the Radika trout, and in recent years, to Mavrovo lake the Ohrid plasica- (Albutnus albidus alborella) has also been introduced, and seems to have adjusted well to the new waters.

The Bistra mountain landscape with its high peaks and forests of pine and other evergreen woods right down to the base, has an atmosphere of unusual calm. In the winter months, when the snow covers its slopes, it gives an impressive picture of peace, tranquility and eternity. Here, clouds and fog are very rare occurrences. 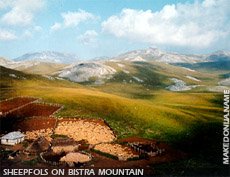 It was for this reason that, the ancient Slavs, long ago, called the mountain Bistra/clear. In addition to this is the clear water which flows in the numerous rivers running off its slopes. The rich vegetation, distributed over the various levels of the mountain, the numerous pastures over which (as mentioned before) lingers the sound of the shepherd's flute, the cold and bright days, the clear air, and the sweet water, as well as the abundance of fauna attract mountaineers, skiers and tourists throughout the year.

The mountain Korab is situated in the north-western part of the National Park, under the Šar massifs. It's is particular for its extraordinary, alas yet undiscovered beauty. For a major part of the year, the slopes are covered with snow. The mountain has an alpine relief/ alpine climate and diverse flora and fauna, which makes it attractive for both tourists and scientists. During the summer months, the grassy flower meadows and extensive wooded areas are especially beautiful, and there is the range of unusual fauna: does, wild goats, bears, lynxes and the rare Korab eagle. The peak Golem Korab at the height of 2,764 m affords a spectacular view. One particular attraction is the 70 m high slope located at the inflow of the river Proj Fel.

The mountain Dešat is situated, on the southern part of the National Park, in the western part of country, north of the Debar filed, very close to the Macedonian-Albanian border (Western of Bistra and southern of Korab). Nearest town from the Macedonian side is Debar. The highest peak is Velivar (2,373 meters) and then Krčin (2,345 meters) with it's ridge is solid and straight as a horseback and is at every step higher than 2,000 m. Other significant peaks are: Deli Senica, and Suva Bara. Deshat also has deep river gorges, immense forests, and small glacial mountain lakes. 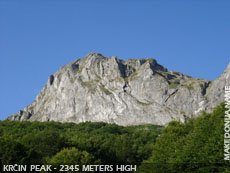