It is located on the mountain Baba, within the Pelister national park. This mountain possesses some extraordinary features which have been a basic factor in the development of tourism in the region. The mountain has got 25 peaks with height above 2,000 m. The highest peak - Pelister is 2,601 meter high. 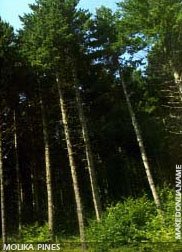 Especially significant are the hydrological characteristics: numerous springs, mountain rivers and the two mountain lakes - Golemo (Big) and Malo (Small), known as "Pelisterski Oči"/Eyes. However, the most distinctive feature is the presence of the Molika tree - an endemic species of tree which exists only in this place and is specific for its aesthetic effect on the landscape. The variable climatic conditions are dependent on height. The higher areas have a continental climate, while above 1,800 m the climate is mountain. Above 2,400 m the mountain climate gains Alpine characteristics. The average air temperature is 1,30C to 2,30C. Because of such a climate, during the entire winter, until April, the slopes of the mountain Baba are covered with deep snow. All this creates ideal conditions for the development of winter tourism.

At the height of 1,610 m, the mountaineering house "Kopanki" is situated with the capacity of 100 beds. The ski slopes are 2,000 m long. A two-seater cable car (chairlift) proceeds 680 m to the ski slopes. The centre possesses 4 ski-lifts: