The Vardar (Greeks refer to it as Axios) is the longest river in the Republic of Macedonia and a major river of Greece. It is 388 kilometres long, and drains an area of around 25,000 km².

The spring of the river Vardar, is one of the greatest natural beauties of the Gostivar region. There, near the village of Vrutok at an altitude of 683 meters, from the base of the mountain Shara rises the river Vardar. From the spring the riverbed of Vardar widens.

It passes through Gostivar, Skopje, Veles, Demir Kapija canyon, and crosses the Greek border near Gevgelija, Polykastro (Rugunovec) and Axioupoli ("town on the Axiós - town of Vardar "), before flowing into the Aegean Sea in Central Macedonia west of Salonica (Solun) in northern Greece (Aegean Macedonia). The lowest point of the Republic of Macedonia of 44 meters above the sea level, is actually the river Vardar leaving the country. 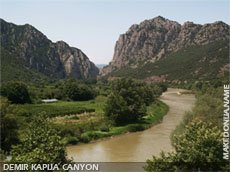 Unfortunately, downstream from Vrutok, through the cities, the river Vardar has become a dump for the garbage of the negligent people.

The Vardar basin includes two-thirds of the territory of the Republic of Macedonia, which some have also called "Vardar Macedonia" after the river.

The valley comprises fertile lands in the Kilkis (Kukuš) and Thessaloniki (Solun) prefectures and Gevgelija and other parts. The river is surrounded by mountains elsewhere. The superhighways Greece Interstate 1 in Greece and M1 and E75 run within the valley along the river's entire length to near Skopje.

The river valley has given its name to the vardháris or vardarec, a northerly prevailing ravine wind which blows down the length of the valley to bring cold conditions to the Thessaloniki area of Greece. It occurs when atmospheric pressure over eastern Europe is higher than over the Aegean Sea, as is often the case in winter.