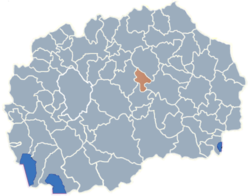 Places in Municipality of Lozovo

Welcome to the Lozovo municipality google satellite map!
Lozovo municipality is situated in Eastern region of Macedonia, and its central area coordinates are 41° 46’ 35.16” North, 21° 53’ 19.99” East and its original name (with diacritics) is Lozovo.
Lozovo hotels map is available on the target page linked above.

Photos nearby Municipality of Lozovo area