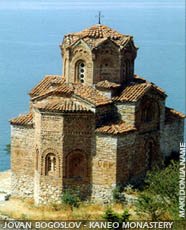 The church St. Jovan Bogoslov at Kaneo: A church dedicated to St. Jovan Bogoslov. There is written record of the time it was built, but it is believed that it originates from the 13th century. The donor and the icon-painter of the church are unknown. Significant to the architecture of the church is the exquisite combination of Byzantine and Armenian elements, which creates very favorable space for examining the medieval monuments in Ohrid. The fresco-painting for the most part is destroyed. Only the fragments of the altar fresco which present "Communition of the Apostles", the portrait of St. Clement, and St. Erazmo and Constantine Kavasilis have been preserved.