High above lake Treska on an inaccessible rocky peak which encloses the gorge if the river Treska, is the church of St. Nicolaus, which once formed part of the Šiševski monastery. No historical details about the origin of the church exist but it was only mentioned first in the 17th century. In the 18th, the monastery was completely deserted and only during the 19th century it was repaired and made fit again for service. The oldest frescoes are covered with a layer of frescoes which date from the 14th century. The west wall was frescoed in 1630, and these frescoes are distinguished by their narrative element which was characteristic of 17th century painting. 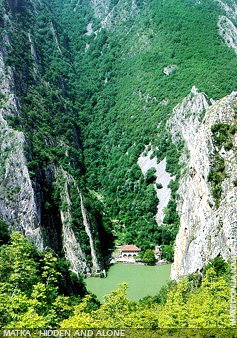