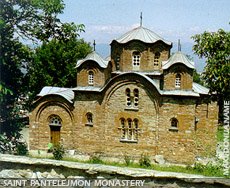 Oh the southern slopes of the Vodno mountain, in a chestnut wood 8km from Skopje in the village of Gorno (upper) Nerezi can be found, where is situated on the most important and oldest monuments from the medieval period in Macedonia, the monastery Nerezi, dedicated to St. Pantelejmon. The area of the monastery garden is surrounded by walls and the dorminatories are of a later period. The church was erected by Alexis Comnenus in 1164, during the Byzantine rule of Macedonia which came under the Comnenus dynasty. The frescoes date from the time of the construction of the church but there are others from the 15th, 16th, and 19th centuries.

The frescoes found in the church make it one part of the most remarkable monuments in Macedonia. AN important epoch in the history of this church was the period form 1923-1926, when the Russian savant prof. Nikola Okunjev succeeded in uncovering of the old 12th century frescoes in one part of the church. The conservation work which followed from 1954-1957 completed the removal of the late frescoes and the total exposure of the old. The church suffered damage during the 1963 earthquake in Skopje but it was soon repaired. The frescoes in St. Pantelejmon have an important place not only in our medieval art but in that Byzantine painting of the time. The Nerezi artist, by his virtuosity in drawing and his rich color succeeded in painting a whole gallery of saints and figures. These frescoes represented a break with the contemporary painting because the painter didn't depict the saints in the customary representative-type manner but introduced figures from the real life. The frescoes in the St. Panteljemon's brought a big changes in the development of the Byzantine art and Macedonian in particular and gave a basis to suppose that local painters, though reared in the tradition of decorative Byzantine painting, could make brave steps even in the 12th and the 13th centuries towards a new art which was later, in the 14th and the 15th centuries known as Renaissance Art.

In addition to its beautiful frescoes, the church at Nerezi had a marble iconostasis dating from the 12th century. The iconostasis didn't remain intact when the church was damaged although some fragments have survived. It was reconstructed in 1932.

Supplied with water by natural springs, the monastery is valued not only for oit architecture but also for the rare natural beauty of its setting and has an unforgettable view of the whole Skopje valley.