Kole Nedelkovski was Kočo Racin's contemporary, and was born in 1912. Because of the poverty he had to discontinue his education and started to earn for living, working as a house-painter. However, he was very interested in the Macedonian language and read books all the time.

He expressed his sympathies towards the workers movement. As he participated in certain activities connected with it, he was constantly banished by the police. 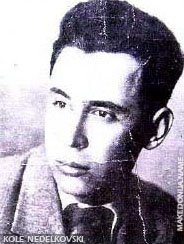 Kole Nedelkovski emigrated in Bulgaria, hoping that he can write about any constraints. In Sophia, he joined the "Macedonian Literary Society" and got together with Racin, Nikola Vapcarov, Dimitar Mitrev and some others literary activists. He started to create poetry more intensively and involved himself in a struggle against the fascism. He was killed in a conflict with the Bulgarian police in 1941.