Rayko Žinzifov was born in Veles, in a very well known family there. His father worked as teacher in a Hellenized school and raised under the influence of the Hellenic spirit, he gave his son a Greek name Xenofon (on Macedonian Rayko). 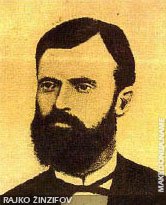 Rayko Žinzifov finished primary school in Veles and later he goes to help his father in Prilep to work. But soon in 1856, he gets under the influence of the Macedonian struggle for cultural revial, leaded in that period by Dimitar Miladinov. Together with Dimitar Miladinov he leaves Prilep and goes to Kukuš (today Aegean Macedonia, Greek name Kilkis), where he works, to stop the Greek influence in the schools.

In 1858 he leaves Macedonia, and goes to Russia in Odessa and in Moscow to study in a university. There he establishes connections with some Macedonian students and especially with Konstatin Miladinov. He takes active work into the party of the students from the Slavic regions under Turkish rule. In 1960 he becomes director of the magazine "Bratski Trud". In 1865 he finishes his studies. And in 1866 he visits Macedonia, and he goes back again in Russia where he teaches to the end of his life. He died in Moscow in 1877.