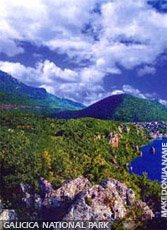 The National Park Galicica is located in the Ohrid-Prespa region, the most important tourist region in Macedonia. Besides the mountain Galicica, the park encompasses areas of the shores of both Ohrid lake & Prespa lake. That is to say the shore line of the Prespa Lake from the location Sirhan near Oteševo and the border, extending to the west part of the lake, to the town Golem Grad, which is also included within the Galicica National Park. In the south from the island, to the Macedonian-Albanian border in the east corner of the Ohrid Lake and in the west from the Macedonian-Albanian border to the east coast of the Ohrid Lake, the border separates from the coast and goes to the mountain Galicica.

Particularly distinctive are the relief characteristics of Galicica National Park: the high mountain peaks which often exceed 2,00 m. (the Magaro peak being 2,254 m), the afforested areas at a height between 1,564 m and 1,984 m, and in the higher areas, the large pastures with numerous herds which are a special ornament of the mountain landscapes. The National Park Galicica also includes a large number of impressive caves, - a geographical reminder of the Glacial Epoch, as well as a special attraction for the tourists.

The climatic features of Galicica National Park are very pleasant and present one of the most significant preconditions for development of the tourism in the National Park. At the height of 1,300 m, it has a moderate-continental climate, amended by the influence of the lakes and the Mediterranean climate which penetrates along the valley of the river Crni Drim. In the higher areas, it changes to a typical 'mountain' climate, which in localities exceeding 2,000 m develops into a "higher-mountain" climate.

The hydrological features of Galicica National Park, are one of its most significant components, considering the fact that the park encompasses a large extent of the shoreline areas of the lakes. The river courses of the park are smaller. Of special attraction to the tourists are the powerful karst springs near the monastery St. Naum. They are the springs of the river Crni Drim and they are characterized by their unique beauty.

In the area encompassed within the Galicica National Park, there is a diverse range of flora. On Galicica, there are endemic species, specific only to that mountain. Also, there are some species of flora, which can be found on other mountains in the Balkans, but nowhere else in Macedonia. The vegetation in the park consists of two groups: forest communities and communities of the alpine and sub-alpine pastures, rich with endemic and relic species. The forests in terms of the quality, represent significant natural wealth. They belong to the zone of deciduous forests, divided into three categories: forests of eastern and white hornbeam, beech and pomegranate forests. 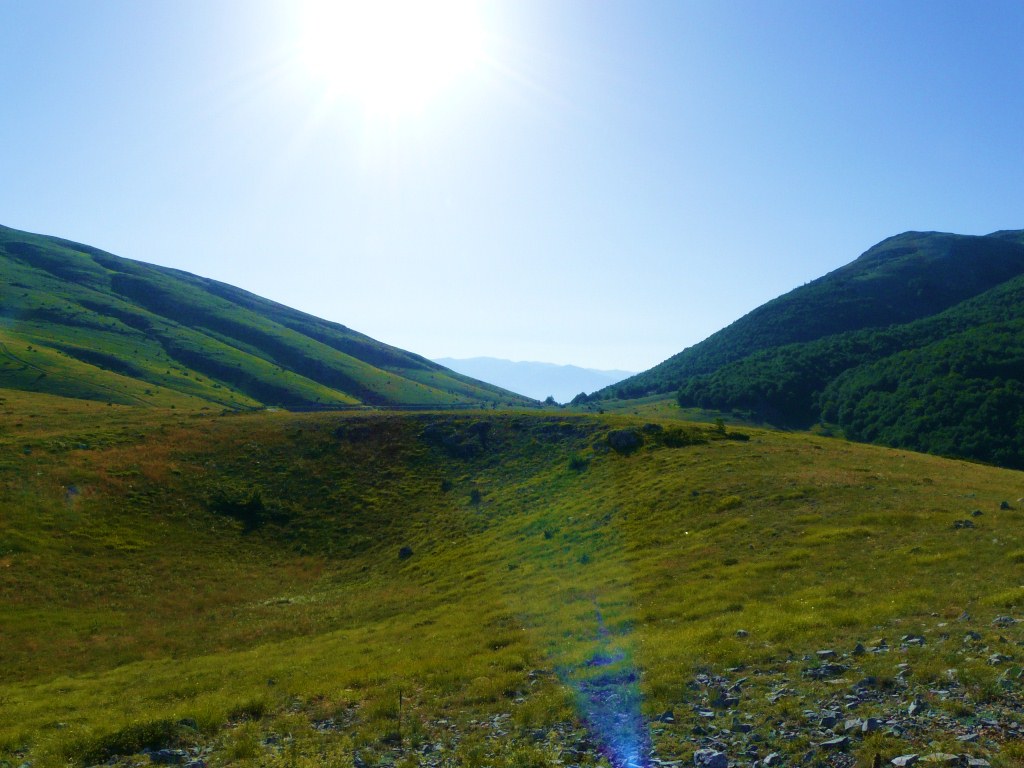 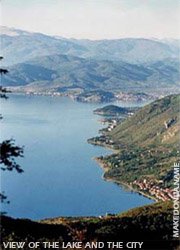 The fauna in the Galicica National Park is also interesting in its diversity and particular to individual areas of the Galicica National Park. The first natural area is the shoreline region of both lakes. In the Ohrid Lake, there are 50 relic and endemic species of snails and several types of fish - trout, plašica, barbell, (ken-Scualius Cephalus). In the deeper lake waters, there are also some other fish species. The island Golem Grad has very diverse and interesting fauna. In the forests lives the big cormorant and its presence is a major attraction for the tourists. There are a lot of other bird species: such as the heron, the big cave bird and the big swallow. The second natural area with specific fauna is the forest zone of the mountain, settled with reptiles, 57 bird species and 12 types of larger mammals. The third area is the higher-mountain zone, above the forest zone, which is poorer in micro-fauna.

The Ohrid & Prespa lakes and the mountain areas in the National Park Galicica are especially attractive for their beauty and natural wealth. Especially attractive is the area surrounding the monastery St. Naum, where the springs of the river Crni Drim are located. With its lower slopes reaching the edge of the lake the mountain Galicica provides vistas of extraordinary beauty. Prespa Lake with its clear water and the clean sandy beaches also presents a very picturesque landscape. Especially attractive is the island Golem Grad and the shallow bays near the village Konjsko, with their small beaches. The mountain areas of Galicica, especially the higher peaks, such as the peak Magaro at the height of 2,254 m, provide ideal opportunities for panoramic views of both lakes.

Of the numerous cultural monuments in the Galicica National Park, with their historical and artistic value, especially significant are the churches St. Spas and St. Holy Mother Zahumska from the 14th century, the Monastery St. Naum and several cave churches such as St. Holy Mother in the village of Peštani and the church St. Petar on the island Golem Grad. The village Konjsko is known for its specific rural architecture.