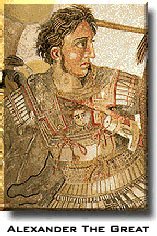 Alexander 3rd of Macedonia (known as Alexander the Great), is the first and only son of the king Philip 2nd of Macedonia and Olympias. Alexander the Great was born in Pella, 356 BC. Alexander was an excellent student who had great education. By wish of his father, Aristotle came in Pella to teach Alexander. As the Greek philosopher came in Pella, he was introduced to a young man with, his best friend the wine, but with no one equal in the military tasks. Historical sources say his favorite book was "Iliyada" from Homer. Having Aristotle as his teacher, we may mention:

"Alexander The Great was the most tolerant conqueror in the world. As he was conquering countries, he never ruined other buildings, he respected the culture of the conquered and wanted from the authorities of every country that he conquered, to pay him taxes."

Alexander's father has well trained him in the political and military tasks, as soon as he reached 18. At the age of 20, after the assassination of his father (in 336 BC), Alexander became king of the ancient Macedonian state. Alexander the Great ruled the ancient Macedonian state for 13 years, since 336-323 BC. In the period of his authority Macedonia became the most powerful country in the region and developed the well trained ancient Macedonian army Phalanx. During the period of his authority, some Greek city-states tried to establish authority over Macedonia, but Alexander defeated them as his father did at Chaeroneia in 338 BC. During this offensive, Alexander the Great totally ruined Thebes, the greatest power in ancient Greece. 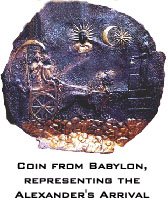 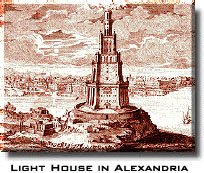 Only two years being a king, in 334 BC Alexander the Great started a long and well planed route to Persia. During this period Persia was weak. Alexander, went to attack the million Persian army with 30,000 people, 5,000 cavalry and only 160 boats. Alexander during this journey for him "kept" a little personal secret. In a mine called Alšar near Kavadarci today, at the foothills of Kožuf mountain, he discovered a mineral from the sun, that produced a strong sun light, even to blind someone. The sun crystal, called Lorandith, was attached to the shields, lances and helmets of the Macedonian soldiers, by direct order of Alexander. His commanders-in-chief didn't know about this and advised Alexander to attack the persians during the night. But he attacked them always during the day, and he realized his wishes. Alexander the Great defeated the nearly 1,000,000 army of the persian king Daruis, in the year of 334 BC in the battle near the river Granicus, with his minor army of 30,000. The Lorandith produced a strong sunlight and caused a temporary blindness to the persian soldiers and there was nothing else left but to attack the practically blind soldiers. The next year of 333 BC, he defeated the Persian army again near the town Issus in Asia Minor (Turkey today). The Persian King Darius escaped, but his family was kidnapped by Alexander. By this great win of the ancient Macedonian army, the way to the middle east was opened. During this conqueror routes, Alexander was joined by the Paionian army, lead by Ariston. As Alexander the Great was entering every town, he was welcomed by all the citizens. After conquering of the towns Tyre and Giza in 332 BC, the way to Egypt's been opened. Then the cities in Phoenicia, Palestine and Egypt with no fight opened their doors and proclaimed his a their king. As excellent politician in Egypt he visited the temple of the Egyptian god of the sun Amon Ra, so the Egyptian also proclaimed him as son of Amon Ra and Pharaoh. In Egypt he established a new city-town, called Alexandria. His army general told him to stop with the war, but Alexander wanted to destroy the Persian state. So on the way the Babylonia at Gavgamela in the year of 331 came to new battle, more bloody than the others. The Persian king again wanted to escape but was brutally killed. Quinnt Curatsius Ruff says:

"During the battle, a macedonian soldier found the wounded Darius, who was shouting for help on Greek, but poor him nobody understood what was he speaking. But the soldier not understanding him was forced to look for a translator." 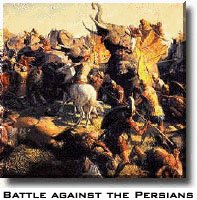 After this victory, the Persian empire was totally destroyed. The Macedonians entered the biggest Persian cities, Babylon, Suza and Persepolis. The Babylonian priests proclaimed for king and Alexander re-built the temple of the Persian god Marduk. In the spring of 327 BC, Alexander and his army marched into India invading Punjab as far as the river Hyphasis (modern Beas). At this point the Macedonians rebelled and  refused to go further. The greatest of Alexander's battles in India was against Porus, one of the most powerful Indian leaders, at the river Hydaspes. In July 326 BC, Alexander's army crossed the heavily defended river in dramatic fashion during a violent thunderstorm to meet Porus' forces. The Indians were defeated in a fierce battle, even though they fought with elephants, which the Macedonians had never before seen. Alexander captured Porus and, like the other local rulers he had defeated, allowed him to continue to govern his territory. Alexander even subdued an independent province and granted it to Porus as a gift. In this battle Alexander's horse, Bucephalus, was wounded and died. Alexander had ridden Bucephalus into every one of his battles in Greece and Asia, so when it died, he was grief-stricken and founded a city in his horse's name. Alexander's next goal was to reach the to travel south down the rivers Hydaspes and Indus so that they might reach the Ocean on the southern edge of the world. The army rode down the rivers on the rivers on rafts and stopped to attack and subdue villages along the way. During this trip, Alexander sought out the Indian philosophers, the Brahmins, who were famous for their wisdom, and debated them on philosophical issues. Alexander the Great became legendary for centuries in India for being both a wise philosopher and a fearless conqueror. One of the villages in which the army stopped belonged to the Malli, who were said to be one of the most warlike of the Indian tribes. Alexander was wounded several times in this battle, most seriously when an arrow pierced his breastplate and his ribcage. The Macedonian officers rescued him in a narrow escape from the village. Alexander and his army reached the mouth of the Indus in July 325 BC and turned westward for home. 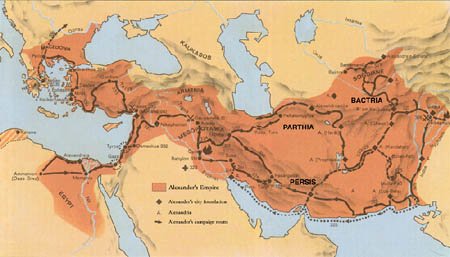 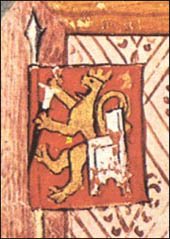 In the spring of 324, Alexander held a great victory celebration at Susa. Alexander the Great and 80 close associates married Iranian noblewomen. In addition, he legitimized previous so-called marriages between soldiers and native women and gave them rich wedding gifts, no doubt to encourage such unions. When he discharged the disabled Macedonian veterans a little later, after defeating a mutiny by the estranged and exasperated Macedonian army, they had to leave their wives and children with him. Because national prejudices had prevented the unification of his empire, his aim was apparently to prepare a long-term solution (he was only 32) by breeding a new body of high nobles of mixed blood and also creating the core of a royal army attached only to himself. After his death, nearly all the noble Susa marriages were dissolved. He established training programs to teach Persians about Greek and Macedonian culture, and he married Roxanne, a Persian princess.

Death of Alexander the Great 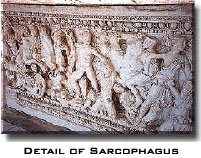 "Relief presentation of the battle by the river of Granicus (334 BC) against the Persians, led by Alexander The Great (The Archeological Museum - Istanbul, Turkey)"

We will probably never know the truth, of Alexander's mysterious death, even though new theories are still coming out. Alexander the Great, the Macedonian king and the great conqueror, died at the age of 33, on June 10th, 323 BC. Three days earlier, on the 7th of June, 323 BC, the Macedonians were allowed to file past their leader for the last time before he finally succumbed to the illness. Alexander died without designating a successor. Alexander's death, marked the end of the great ancient Macedonian empire, that carried on in the hands of Philip 3rd Arrydeus and his child Alexander 4th. Alexander the Great died as a god and as a legend, he had 32 years and created an empire, like nobody before and after him, did. After his death, Alexander the Great was becoming more and more famous.

The first Macaveian book in the Bible starts like this: