Following the death of the emperor Alexander the Great, who died in 323 BC, without designating a successor, the Macedonian Empire was divided between small and big state leaded by: Egypt (Kingdom of Ptolomeius), The Kingdom of Seleuk Nikator and Macedonia.

After the death of Alexander The Great, the army for king brought his step-brother Philip 3rd Arrydeius and his son from the marriage with the princess Roxanne - Alexander 4th. But in the European part in Macedonia, ruled one of the generals Antipater, and in Thrace Lyzzimachus. 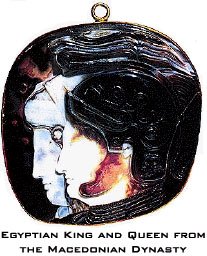 The second big Kingdom of Seleuk Nikator stands until 64 BC, until falling under Roman Rule.

In Macedonia wars for the throne were for a long period, especially between Polisperhon and Cassander (son of Antipater), who kept his authority over the Greek territories on the Balkans. In this period the family of Alexander the Great has disappeared. After the Cassander's death in 298 BC (who was general in the Macedonian army and founder of Salonica), Macedonian state was divided between Piros and Lyzzimachus, who later became independed ruler of entire Macedonia.

By the battle at Cypupedion in 281 BC was ended the rule of Lyzzimachus and the entire territory of the kingdom of Alexander 3rd, without Egypt became a part of the Kingdom of Seleuk Nikator. But after a long period Ptolomeius Ceraunos released Macedonia again. 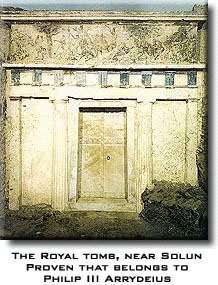 In this period Macedonia was free and there were no wars, over it's territory. But the attacks of the Galls have totally destroyed the ancient cities like: Pella, Heraklea... and also the Greek religious city of Delphi. In 276 BC, the Galls were defeated by Antigonius Gonat (277-239 BC), the founder of the last Macedonian Dynasty.

Since 239 BC, ruler of the Macedonian throne was probably Philip 4th (information not sure) until 221 BC. After him, king became Philip 5th (221-179 BC) who took lead the Macedonian army in two of three wars, against the Romans. He was too old to participate in the last war, the third. His son Perseius (179-167 BC) seat on the throne and was defeated by the Romans in the battle of Pidna mountain in 167 BC.