About Philip 2nd of Macedonia

Philip 2nd of Macedonia (382-336 BC), king of Macedonia (359-336 BC), was born in Pella, the capital of ancient Macedonia. Philip 2nd was educated king who had good knowledge in the politics. Long before Philip was born, the ancient Macedonians regarded the ancient Greeks as potentially dangerous neighbors, not as kind people. The Greeks stereotyped the Macedonians as "barbarians" and treated them in the same bigoted manner in which they treated all non-Greeks. Herodotus, the Father of History, relates how the Macedonian king Alexander 1st (498-454 BC), a Philhellene (that is "a friend of the Greeks" and logically a non-Greek), wanted to take a part in the Olympic games. The Greek athletes protested, saying they would not run with a barbarian. Historian Thucydidius also considered the Macedonians as barbarians. Philip 2nd, the Macedonian "barbarian" was a hostage in Thebes, from 367 to 365, then the greatest power in Greece. During that period he observed the military techniques of Thebes, which will help him later reorganize the Macedonian army on the model of the Theban phalange. In 364 Philip returned to Macedonia and in 359 he was made regent for his infant nephew Amyntas. 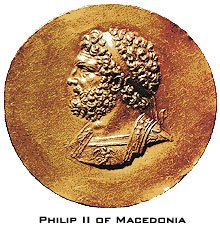 Later that year Philip 2nd seized the Macedonian throne. Philip came to power at the time when the Macedonians had just suffered a defeat from the Illyrians. Macedonia was in political and military turmoil, and Philip immediately set about bringing the people of Macedonia under his control. In less than two years Philip 2nd will secure the safety of his kingdom and firmly establish himself on the throne. After defeating the Illyrians in 358 BC, Philip sought to bring all of Upper Macedonia under his control and make them loyal to him. Apart from military, Philip had several political inventions that helped turn Macedonia into a world power. Later near Bitola, Philip built the city Heraclea Lyncestis. Philip's primary method of creating alliances and strengthening loyalties was through marriage. In 357 BC Philip 2nd married Olympiadas, daughter of an Epyrian king, from the royal house of Molossia, and a year later they had a son, Alexander. But Alexander never got along well with his father, although Philip was proud of Alexander for the Bucephalus incident. Alexander had always been closer to Olympias than to Philip. Philip and Olympias also did not get along all that well. The family essentially was split apart irreparably when Philip married a woman named Cleopatra, a Macedonian. At the wedding banquet, Cleopatra's father made a remark about Philip fathering a "legitimate" heir, i.e., one that was pure Macedonian. Alexander took exception and threw his cup at the man, and some sources say Alexander killed him, some that was killed by his lover. Enraged, Philip stood up and charged at Alexander, only to trip and fall on his face in his drunken stupor. Alexander, rather upset at the scene, is to have shouted:

"Here is the man who was making ready to cross from Europe to Asia, and who cannot even cross from one table to another without losing his balance." 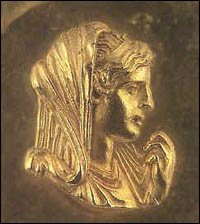 When Philip divorced Olympias Alexander fled. Although allowed to return, he remained isolated and insecure until Philip was assassinated (some think that Olympias may have even had a role in Philip's murder), in the summer of 336 BC. Philip allowed the sons of nobles to receive education in the court of the king. Here the sons would not only develop a fierce loyalty for the king, but it was also a way for Philip to, in a sense, hold the children hostage to keep their parents from interfering with his authority. He also gave more people positions of power and more of a sense of belonging to the kingdom. From then on, Philip's policy was aggressive. In 357 he conquered the Athenian colony of Amphipolis in Thrace. That gave him a possession of the gold mines of Mount Pangaeus, which will finance his wars. In 356 he captured Potidea in Chalcidice, Pydna on the Thermaic Gulf, and in 355 the Thracian town of Crenides, later acquiring new name Philippi. In 354 Philip conquered Methone, advanced into Thessaly but did not attempt to take the pass of Thermopylae in 352 because it was strongly guarded by the Athenians. In 351 the great Athenian orator Demostenes delivered the first of his Philippics, a series of speeches warning the Athenians about the Macedonian menace to Greek liberty. The great Athenian statesman Demostenes, spoke of Philip 2nd:

"Philip 2nd cannot be a friend of the Greeks. Not only Philip is no Greek, not even related to the Greeks, but not even a barbarian from any place that can be named with honors, but a pestilent knave from Macedonia, whence it was never yet possible to buy a decent slave."

The Macedonian "barbarian" defeated Greece at the battle of Chaeronea in August 338 BC and appointed himself "Commander of the Greeks". Philip's army was greatly outnumbered by the Athenian and Theban forces, yet his phalanges overwhelmed the Athenians and Thebans. His victory made him complete master of Greece. This battle had established Macedonian hegemony over Greece and this date is commonly taken as the end of Greek history and the beginning of the Macedonian era. Two years later, in the spring of 336 BC, Philip start preparing for his big invasion of Persia. He sent Attalus and Parmenion with 10,000 troops over into Asia Minor but just before he was to travel to Asia to begin the conquest, he was assassinated. His vision to conquer the Middle East, will be carried away by his son Alexander the Great. However, without the military and political efforts of Philip, Alexander would have never been as successful as he was. According to Bosworth, Philip's work with the Macedonian army and establishment of alliances with the Balkan peoples gave both himself and Alexander the resources necessary to carry out such conquests.

Philip introduced the 6 meter long sarissa, a wooden pike with metal tip, for use by his infantry in the phalange. The sarissa, when held upright by the rear rows of the phalange (there were usually eight rows), helped hide maneuvers behind the phalange from the view of the enemy. When held horizontal by the front rows of the phalanx, it was a rather brutal weapon. People could be run through from 20 feet away, giving quite an advantage to the phalanx in hand-to-hand combat. Philip made the military a way of life for many Macedonian men. He made the military a professional occupation that paid well enough that the soldiers could afford to do it year-round, unlike in the past when the soldiering had only been a part-time job, something the men would do during the off peak times of farming. This allowed him to count on his man regularly, building unity and cohesion within the army. In addition to the basic phalanx, Philip and Alexander used light auxiliaries, archers, a siege train, and a cavalry.