The Turks after being defeated, by the Austrian-Polish troops in Vienna in 1683, were force to retreat. This defeat resulted various risings in the southern parts of the Balkan Peninsula. While the Austrians were spreading terror in the Turkish regions in Serbia and getting more deeply in the European part of Turkey, in Macedonia by the way, there were the aggressive troops of the local movement for liberation, that was becoming an local uprising. That uprising according the history, is known as the Karpos uprising.

The life of the miners of the Kratovo basin was unbearable. Exploitation reached a culmination point and the miners rose under the leadership of the Karpos, a peasant miner and from other side and Ajdut. The liberated and fortified Kratovo, Kriva Palanka and came far as Veles and Demir Kapija (Iron Door). This is a reason that the Turkish Sultan sent message to the Grand Vizier's of Nis, Leskovac, and Vranje to attack this "outlaw formations". He even mentioned that those like Karpos to be punished on every possible way, who was already a leader to 15,000 uprisers. It is of great honor to mention that, the Karpos uprising was supported by the Austrian King Leopold 1st, who set Karpos as king of Kumanovo. After this event, the uprisers 3,000, tried to take over the control with Skopje and were supported by the Austrian army. Then, the Austrians appeared outside Skopje but were driven away by the Turks who, during that time were defeated on several occasions by the Austrians. The Austrian general Picolomini led his army through Kosovo (then a Turkish province) and Kachanik and penetrated as far as Skopje. The Austrians defeated the Turkish troops and with the help of the rebels entered Skopje which had already been liberated. The Austrians were amazed. An Austrian officer mentions that:

"Skopje is spread over a large area and is only a little smaller than Prague. The town is surrounded by beautiful orchards in a large and rather fertile and well cultivated plain. It has almost 60,000 inhabitants, among them 2,000 Jews." 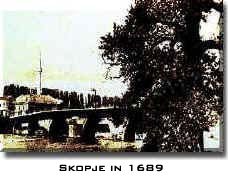 Picolomini captured in Skopje on October 25th, 1689. He didn't intend to go south, but the wanted to go on to Durres (Drach) through Albania. However first of all, he wished to destroy the Turkish fortification and thus to fill the Turks with terror. But unfortunately, there was an epidemy of illness, and the next day on October 26th, the general Picolomini commanded his soldiers to set fire in Skopje, and like Nero he watched the fire while listening to the music of his military band. He wrote all this to his king, Leopold 1st. After the fire, the Austrian army withdrew to Kačanik Pass and Kosovo. But the general Picolomini, had been infected by the plague in Skopje, and he died in the morning of November 9th. The general forces of the uprising that were settled in the liberated towns, Kriva Palanka and Kumanovo.

The end of Karpos uprising

After the massive attacks of the Turkish-Tatar troops, this cities fall again under Turkish rule. The Turks gathered their army and the staff held a counsel at Edirne, where the question of overcoming the uprising of the Macedonian miners under the leadership of Karpos was discussed. The task was carried out by Halil Pasha, who retook all the places that have been liberated by the miners. Skopje was the last to surrender. Karpos was captured in Kumanovo and brought to Skopje where he was hung on a tree near the Stone Bridge, butchered by soldiers and thrown into the muddy waters of the Vardar river. This was the bloody and the tragic end of the Karpos uprising, at the beginning of December 1689.